Special instruments are used to assist in the divination to transcribe Orunmila’s wisdom through the diviner. The items used for divination include: In Yoruba mythology, Orunmila is an Orisha (Orisa), and deity of prophecy.

* a group of sixteen Ikin, commonly known as palm nuts, which are used to create binary data
* a vessel for the seeds
* a divination tray (opon Ifa).
* a tapper instrument (iroke Ifa)
* beaded belts for the babalawo to wear. 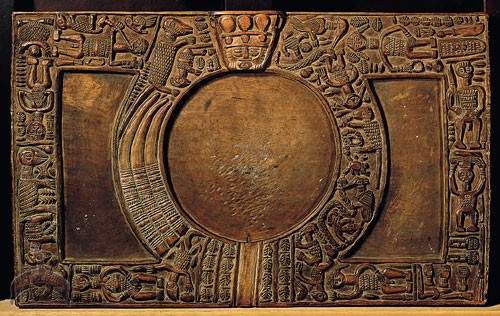 The tray and tapper are used in Ifa divination. This tray, adorned with carved images and dusted with powder, serves as the template on which sacred signs (odu) related to the personal concerns of a diviner’s client are traced as the point of departure for analysis. In contrast to those transitory signs, the more permanent backdrop of the carved motifs on the tapper and tray constitutes an artistic exegesis of the forces that shape human experience and the universal needs fulfilled by such quests for enlightenment. Species Elaeis guineensis Elaeis oleifera The oil palms (Elaeis) coomprise two species of the Arecaceae, or palm family.  Exegesis (from the Greek to lead out) involves an extensive and critical interpretation of a text, especially of a holy scripture, such as of the Old and New Testaments of the Bible, the Talmud, the Midrash, the Quran, etc.

To dafa , the babalawo places the tray in front of him and taps rhythmically on it with the pointed end of the tapper, invoking the presence of past diviners and of Ifa (also called Orunmila) the God of divination. A ritual is a set of actions, performed mainly for their symbolic value, which is prescribed by a religion or by the traditions of a community. …

There are a variety of palm nuts that are available, but only specific kinds may be used for Ifa divination. The palm nuts are grouped in one hand, then the diviner attempts to shift them all to his/her other hand at once, and counts the remaining Ikin left, hopefully to discover that either one or two remain. (Odu, which are the foundation of the binary data, can only be marked with either one or two palm nuts, remaining in the diviner’s original hand. As this process goes on, the diviner marks single or double marks in wood powder spread on his divination tray until he or she has created one of the 256 odus that are available.

Each of these odus is associated with a traditional set of Ese (verses), often relating to Yoruba mythology, which explain their divinatory meaning. These verses represent thousands of years of observation and are filled with predictions, and both mundane and spiritual prescriptions that resolve issues found in that Odu. The mythology of the Yorùbá is sometimes claimed by its supporters to be one of the worlds oldest widely practised religions. …

After obtaining the Odu that governs a situation or event, the diviner then determines whether the Odu comes with Ire (which is poorly translated to mean good luck) or Ibi (which could be viewed as obstacles or impediments to success). After this process the diviner now determined appropriate offerings, spiritual disclipines and/or behavioral changes necessary to bring, keep or compel success for the person receiving divinatory counsel.

Ifa has 16 stanzas. Each stanza has about 495 verses. ( Odus/Odu Ifa). Baba’alawo or Iyalawo (Ifa Chief priest or priestess ) is the one assigned to dafa (just like the Imam studying the verses in the Quran or Pastor studying  verses and chapters in the Bible in Eastern and Western civilizations, Islam and Christianity respectively).

So when Omo Eniyan with problem goes to a Baba’alawo or Iyalawo (Ifa Chief priest  or priestess ) to find guidance, the Baba’alawo (Chief-priest) is required to consult Ifa. i. e Look into ifa or Dafa, find the Odu/verse where that person’s destiny or problem falls and interpret it to the Omo Eniyan as guidance to brighter future. See Example of an Ifa verse here 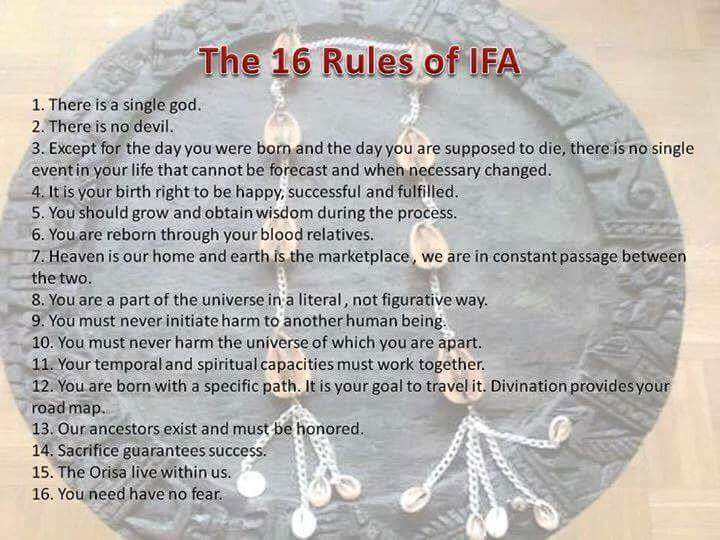 There are sixteen major Odu, when combined there are total of 256 major Odu that govern all situations, all circumstances and all actions and consequences in life. These form the basic of Yoruba spiritual knowledge and the foundation of all Yoruba divination systems.

Interpreting Odu is fairly easy. Where I is an odd count or a “heads” result, and II is an even count or a “tails” result, the sixteen basic patterns and their Yoruba names are set forth in the sidebar.

The Babalawo recites a series of proverbs and stories from the Ifa poetry that go with that choice. The final interpretation is made by the person seeking guidance, who decides how the verses that the babalawo has recited should be applied to the problem at hand. Though the number of symbols is different, the Chinese I Ching divination system also bears some resemblance to Ifa divination. Like the Chinese I Ching, Ifa combines a large body of wisdom literature with a system for selecting the appropriate passages from it. Unlike the I Ching, however, Ifa poetry is not written down but passed down orally from one babalawo to another.

Akapo. Student or apprentice under a Babalawo It has been suggested that this article or section be merged with Iyanifa. …

* Babalawo -Male Ifa Priest
* Iyanifa -Female Ifa Priestess
* Dida Owo -casting Ikin Ifa.
* Ohunte Ale – Inscribing or marking Odu on the Opon Ifa
* Opon Ifa – Divining tray
* Orunmila -Prophet that developed and spread Ifa divination system. Now considered a deified Ancestor that embodies principles of Ifa.
* Orisa – Primordial energies from which all living things emanate from; The Deities that represent various manifestations of the ONE GOD, Olodumare.
* Irunmole: The Primordial God, first sent to earth to make the world habitable for humankind, also the full spectrum of Gods(Orisa) created by Olodumare (the Creator GOD) for worship and veneration numbering 400+1 as an infinite number of natures manifestation and recreation.
* Dafa means to cast Ikin Ifa (sacared holy palm kernel) for divination purpose and divine direction in life
* Apetebi: is the wife of a Babalawo AND / OR the wife of a Babalawo Ikin Ifa, she is one of the few titled positions within the Yoruba tradition and holds an important position within the tradition and culture, she will assist her husband and help to teach children the fundaments of consulting Ifa as a philosophy and guidance.
Iyanifa is a Yoruba title that denotes a Priest of The God or Orisha of Wisdom Orunmila (IFA).

Ifa priests and worshippers among the Yoruba people bear names related with Ifa, typically, but not necessarily, begin with the word, ‘Ifa’, like Ifadairo, Ifabiyi, Ifadare, Ifabunmi, etc. The first “I” in these names may be omitted to form Fadairo, Fabiyi, Fadare, Fabunmi, Falola, etc. The prefix “Awo” is also used in names ascribing Ifa or its priesthood – Awolalu, Awodele, Awolowo, Awosika, etc.